Welcome to the next in our ‘meet the team’ series: This week we introduce Team BlackLine. A group of five Hampshire dads set on making a difference. The team, headed up by TVs Phil Spencer, also includes Mark Lindblom, Rupert McInnes, Nick Sowerbutts and Alex Lewis, and they will be taking on Everest in the Alps 2019 in just over three weeks time!

What’s your inspiration for taking on such an epic challenge?

PS: Firstly the fact that only 2% of cancer research funding goes towards brain tumours and a small percentage of that goes towards paediatric brain tumours, the fact that they’re incurable. So they’re massively under researched, that’s the first reason and those of us who are lucky enough to have healthy children can’t imagine what it must be like to have a sick child.

Secondly the word Everest conjures up so much. It attracts attention, it is an attention grabbing challenge and it’s not something that people have heard of. Everyone’s heard of Everest, everyone knows it’s the highest mountain in the world but not so many people have heard of ski touring and what it involves and very few people have heard of Everest in the Alps. As a fundraising challenge it’s really out there. Everyone’s heard of the London Marathon, the three peaks and those kinds of challenges but this is something really different. It’s hardcore and it’s pushing everyone massively out of their comfort zone, so that’s a massive inspiration. Not least for a marathon you can go and run around the block, you can train for that, you can do the route but you can’t do this because you need a lot of support, you need safety, you need routes, you need guidance, need a backup plan if things go wrong and we live in flat old England rather than the Alps!

ML: Last year my friend Phil did the EIA challenge… I was blown away straight with the concept of EIA but also the incredibly tough journey the Ritchie family have been through. The more I read about EIA, I just felt that what Rob and his friends did on that first trip to raise funds and awareness of The Brain Tumour Charity was truly inspirational on so many different levels and this spurred me on to join this year’s challenge.

RM: I took on the U.K. National Three Peaks Challenge in 2018 and loved it and was looking for another challenge which would physically and mentally stretch me while raising valuable funds for a number of great charities close to my heart – also I love the mountains and skiing but have never skinned before – so I learn something into the bargain! (Which could be – “I hate skinning” – but I hope not).

NS: About a year ago I was contacted by Phil Spencer who was undertaking an event for a The Brain
Tumour Charity. I was touched by the story he told and the battle a little boy called Toby faced for
the rest of his life. Of course I was delighted to sponsor him for such worthwhile cause. Roll forward
eight months and Phil spoke to me about the 2019 challenge and asked me if I would like to join him on
the third EIA expedition. In all honesty I was very nervous about committing to an event like this. I
wasn’t even sure I would be physically able to complete an endurance event like this. During the eight
months since I first sponsored Phil two things happened in my life, firstly due to changes in my work
circumstances I had a few months to assess life’s priorities and secondly a former college of mine
died as a result of a brain tumour. As a result it didn’t take me long to decide that regardless of how
tough an event EIA might be it was something I could do to make a difference to the lives of those
children affected by brain tumours.

I had often thought about taking part in the London Marathon but due to issues with my back I am
unable to run for prolonged periods. EIA appealed immediately as the perfect event for me
personally. I love skiing (usually downhill!) and the amazing feeling you get being high in the
mountains. There’s really nothing like it. Skiing is something my whole family enjoys and I hope that
taking part in the event will inspire them to push themselves in their life and make a difference to
others in everything they do. 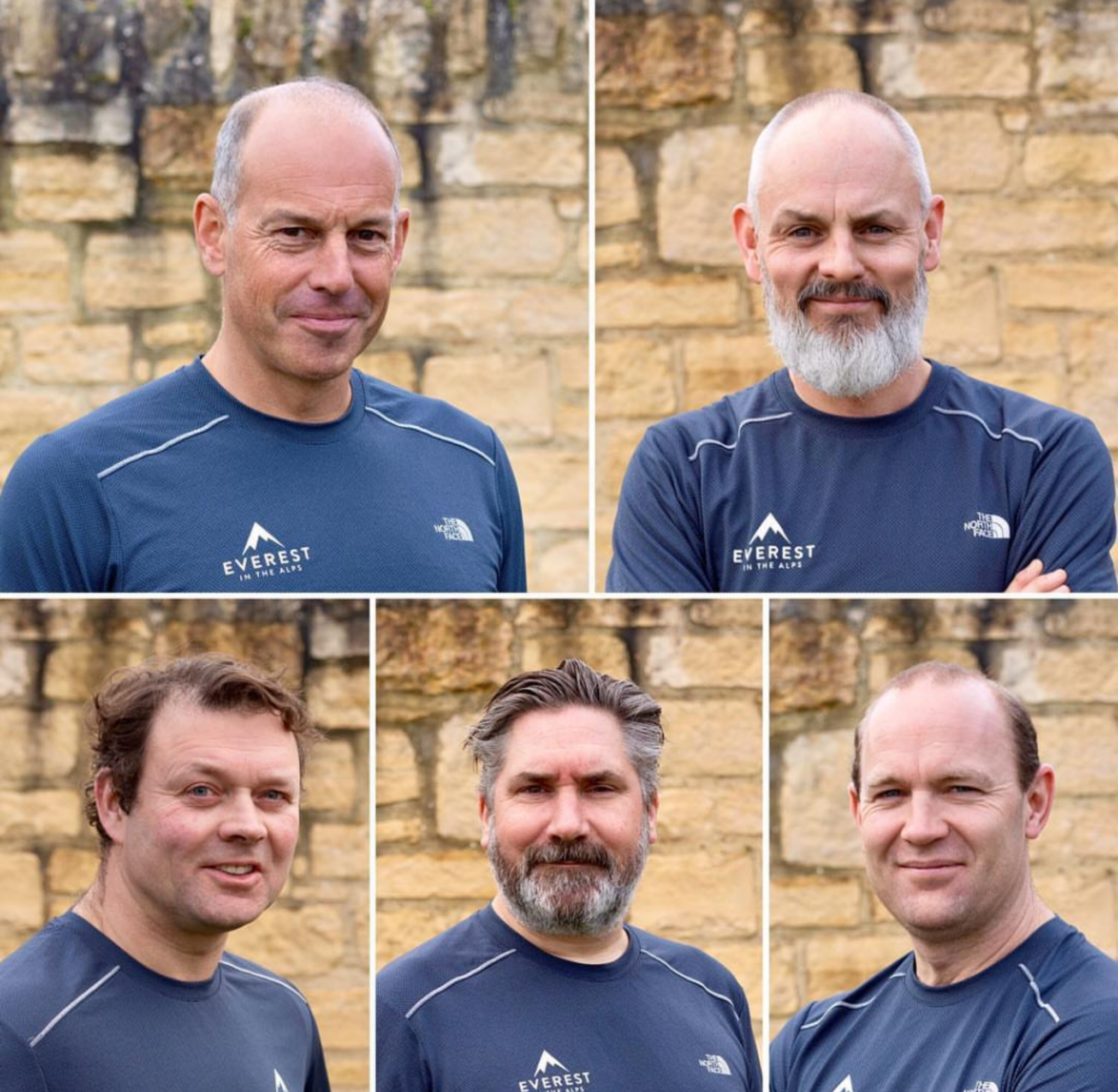 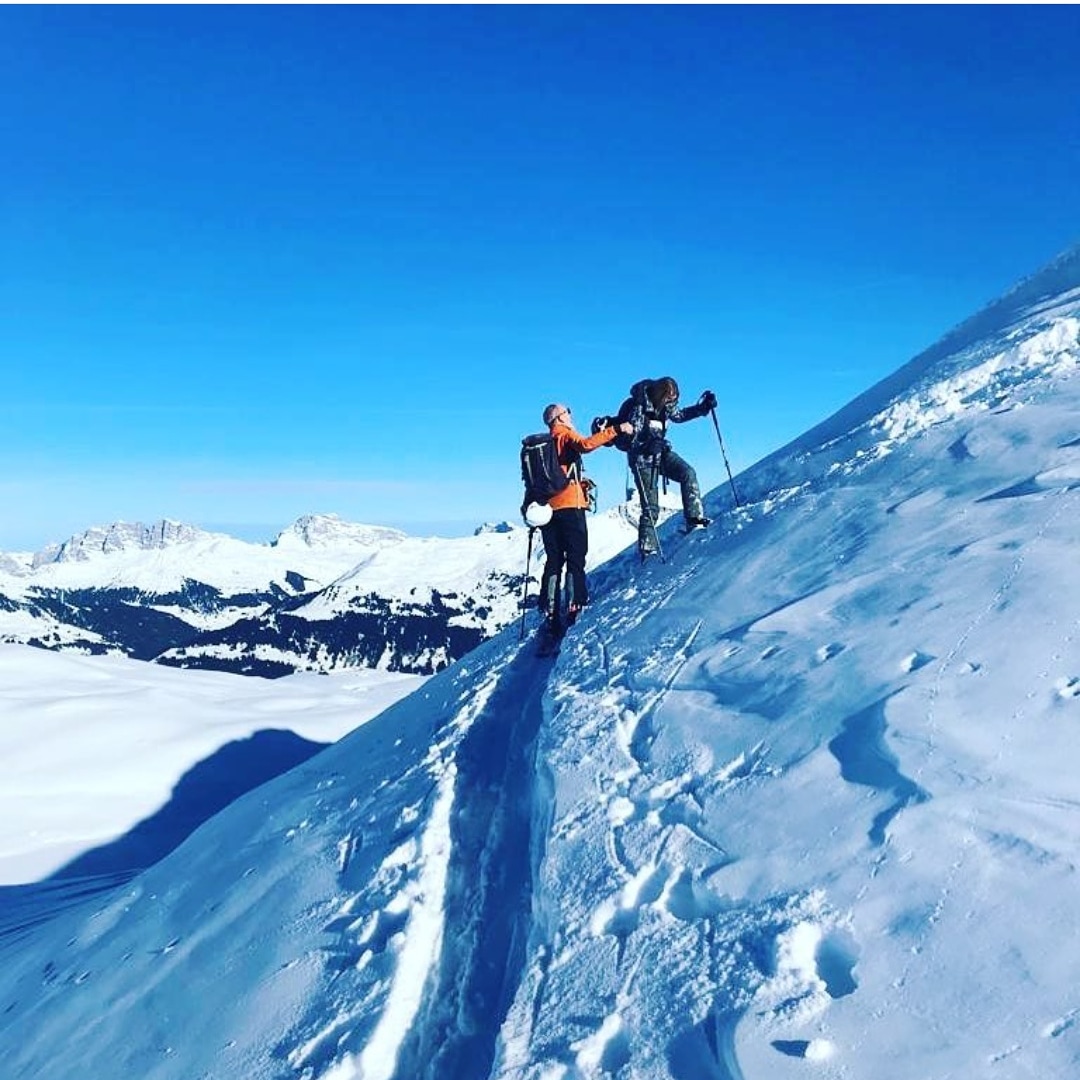 PS: This will be my second time! I enjoyed it a lot more than I was expecting last time. I thought I would enjoy the team atmosphere and I thought I would get satisfaction and fulfillment out of raising money, in fact we raised a huge amount of money, nearly a million quid, that’s making a big difference! I just loved it! I enjoyed the training, I like to have a goal in front of me so I know what I’m doing and I can work towards it. I’ve always tried to keep fit and active but life gets busy and little by little it becomes harder to find the motivation and the time to train, but if you doing this kind of event, it’s at the forefront of your mind. It is a priority and you’ve got to do the work. I function better under that kind of scenario because it forces me to get off my bum and get fit!

There’s a lot of buzz and excitement when you finish the challenge and then you come back and you expect it to dissipate a little. At first people ask all about it but you expect it all to dissipate and you expect that you’ll forget about it over time but that didn’t really happen for me! I loved it and I carried on thinking of it very fondly and how much I personally got out of it, aside from all of the other reasons. I was very proud of what I did and how I handled it. I’m pushing 50 in fact I’m 50 this year! I did look around at other challenges and thought maybe I ought to do something different but actually this is a phenomenal challenge and it is supremely well organised and that makes a difference. For someone who’s putting the time and effort in and giving up a week to go and do the challenge in the Alps, there’s the safety element to it but the whole thing is phenomenally well organised.

NS: In short, no. I was until my early 20’s a very active sportsman but for the usual reasons, family, work
etc, I haven’t done much since. Entering you 40’s does make you question what you could still do
and how hard you could push yourself. Apart from all the good that will come as a result of the
event, it was the perfect excuse for me to get fit and be more active. I have found the training tough
but I am so pleased with the results, both mentally and physically. I am also overwhelmed by the
support of the team behind me – both the immediate members of my team and wider charity team
supporting us. We have been lucky to receive corporate sponsorship for the event which allows every penny
donated to go straight to the charity. This is an extremely privileged position to be in and I cannot
thank our sponsors enough. Without BlackLine I have no doubt there would be less money going to
the charity.

ML: This is the most physically ambitious challenge I have ever set out to do, and I want to inspire and show my own two children that by pushing myself to do something that is way beyond my comfort zone I can, or at least try to, make the world a better place for others… hopefully by me doing this it will inspire them to do something to help others when they are older. 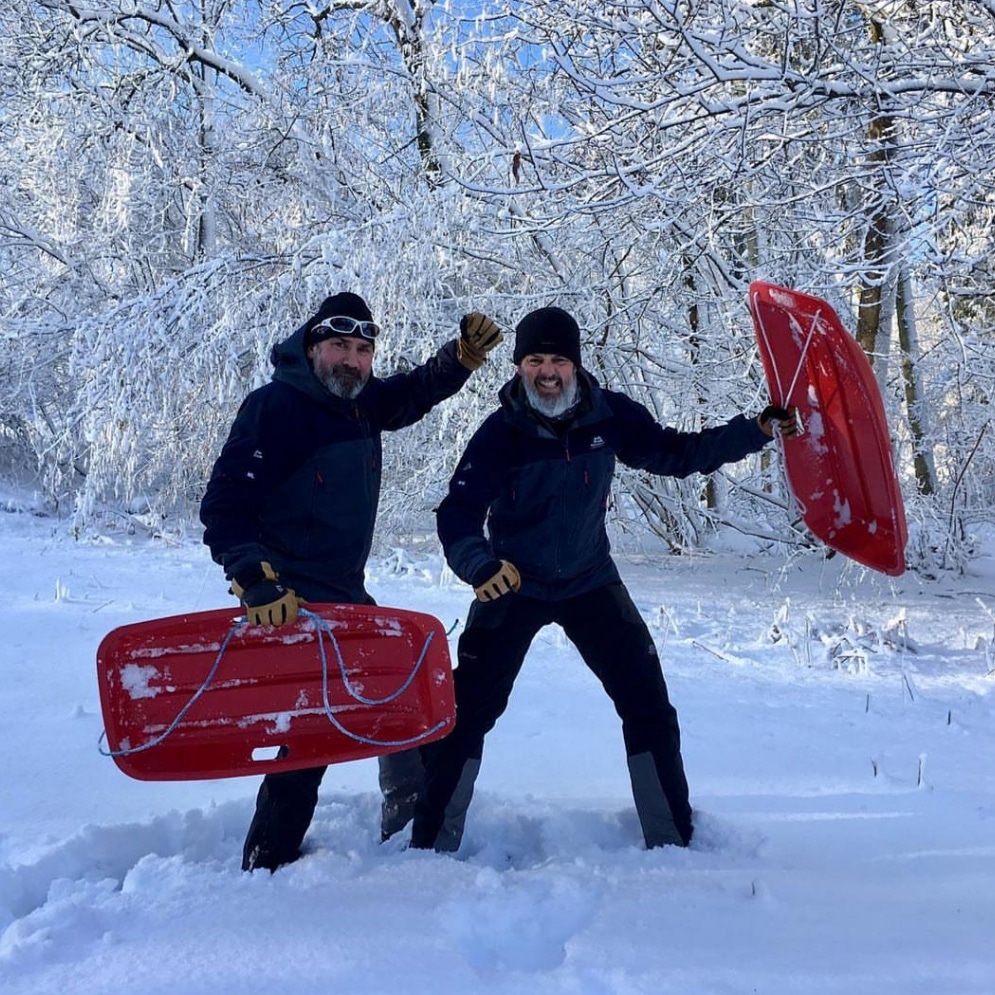 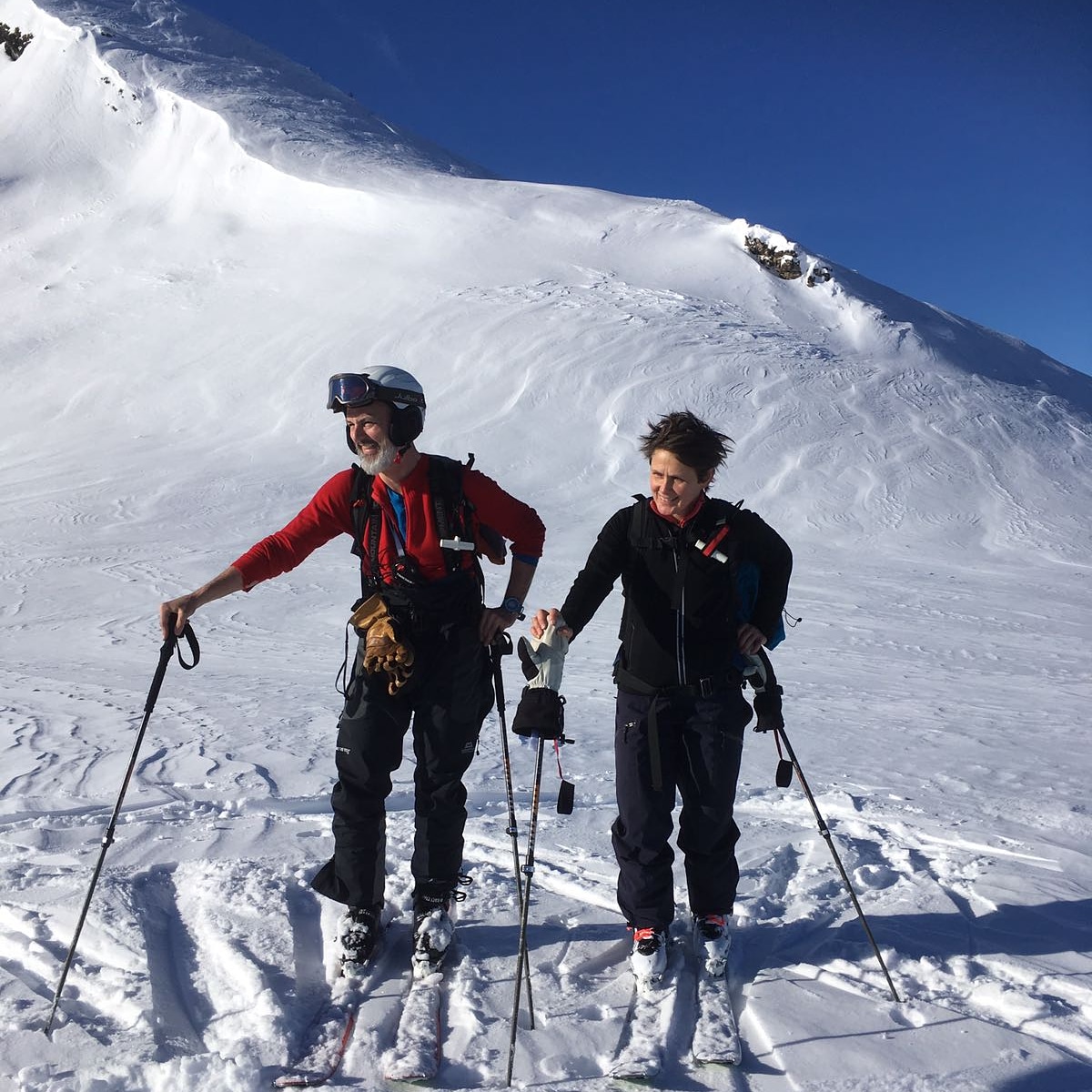 What scares you about the event?

PS: I was properly scared last time, I went to bed thinking about it, I woke up thinking about it, I woke up in the night thinking about it because I was properly worried and massively uncertain. I’d never ski toured before, I’m not the greatest skier, I’d never done an endurance event before. I was worried about nutrition, layers, kit, there’s a lot to think about… but I haven’t got that uncertainty this time. I know physically I’ve done it so I should be able to do it again. I know what training I did last time, in actual fact this time I think I’ve probably done more. I am worried about the weather, just being in that environment the weather is very changeable and it impacts to a huge extent on what you do during the day. We had some pretty extreme weather last time and I’d rather not have that again. It’s totally unpredictable. It’s already a hard physical endurance challenge and you throw in some crappy changing weather and the whole thing just ramps up. I’m hoping it’ll be better this time!

The other thing is my own personal admin. That doesn’t scare me but because I was very anxious about my own ability to do the necessary last year I faffed a lot! One of the guides said to me, on long endurance challenges, everyone’s super fit, everyone’s done the training but the people who win it are the people who have got their personal admin sorted and that’s about having the right kit, the right layers at the right time and the right nutrition, at the right time. For me it was continuous, every time we stopped, every time we got back to the hut, I was sorting kit, that’s probably why I found the whole thing so relentless! I was making sure I got the right nutrition, the right water, the right layers, I was constantly assessing, judging, tweaking, changing all the time… but will I do that again? I don’t know…For me it’s about reducing the variables, reducing the risks and having everything as good as it can be. It’s not much fun setting out on a 3 hour climb thinking I wish I had my fleece on!

ML: It is a daunting undertaking physically & mentally… I have become more acutely aware of the monumental challenge that lies ahead as I am doing my training – however my (probably incredibly) painful 4-day challenge will be insignificant compared with the daily challenges that children like Toby face and that will be at the forefront of my mind as I climb my Everest. I am very nervous, no denying that, and worried about anything going wrong as the fear of not being able to complete the challenge and letting the team, friends, supporters and sponsors down, for any reason, that would be a heavy burden to carry for years to come.

NS: Injury before and during the event is the thing that scares me most. I believe we can conquer the
mountain using grit, determination and teamwork. I just hope our bodies co-operate with our minds!

ML: As a team we have decided we are going to climb this mountain for Toby and all the other children who suffer from inoperable brain tumours and from anaphylaxis. Since I agreed to do this challenge, I have met so many people who have been or are affected by brain tumours and anaphylaxis, and that has made my resolve to do this even stronger. 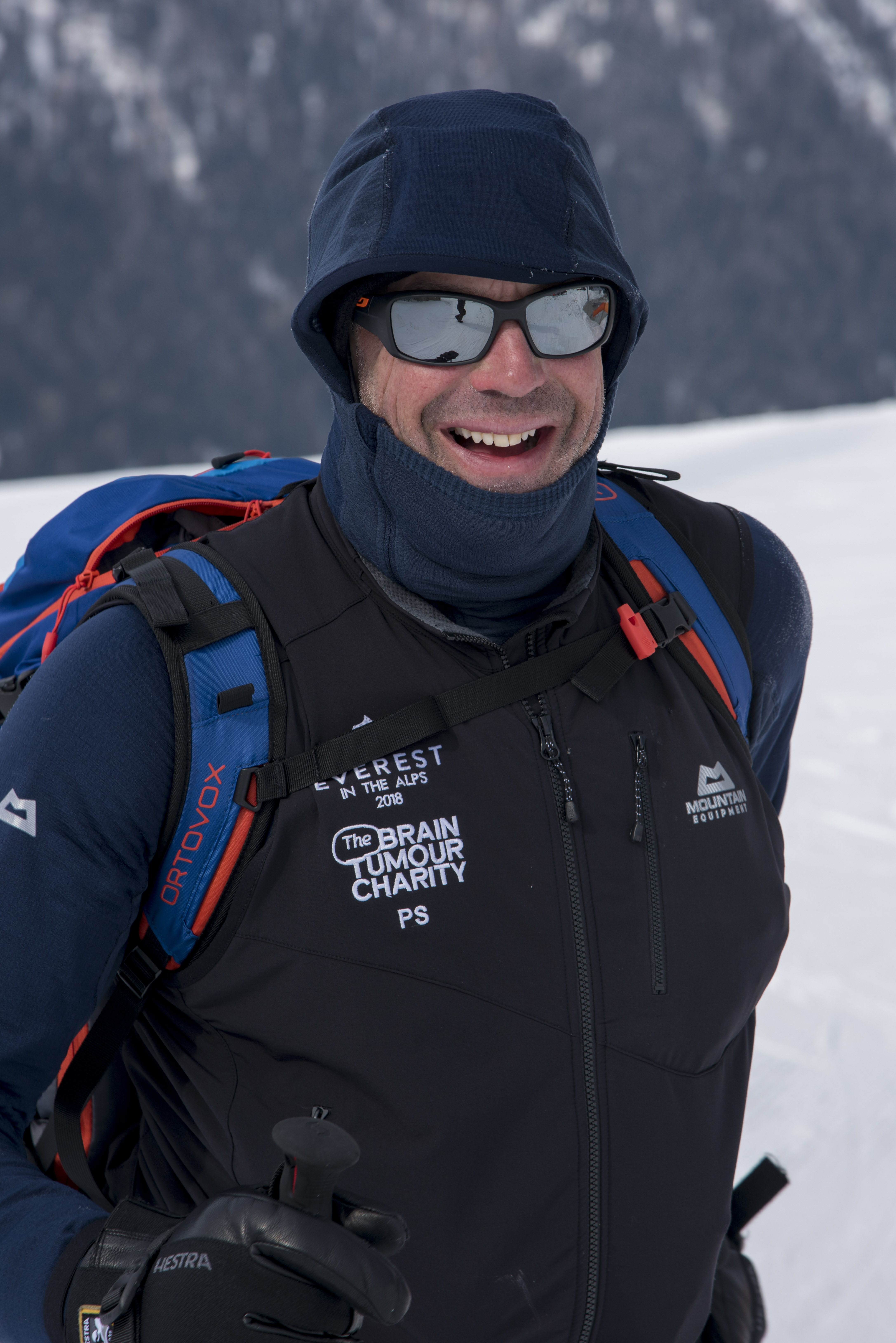 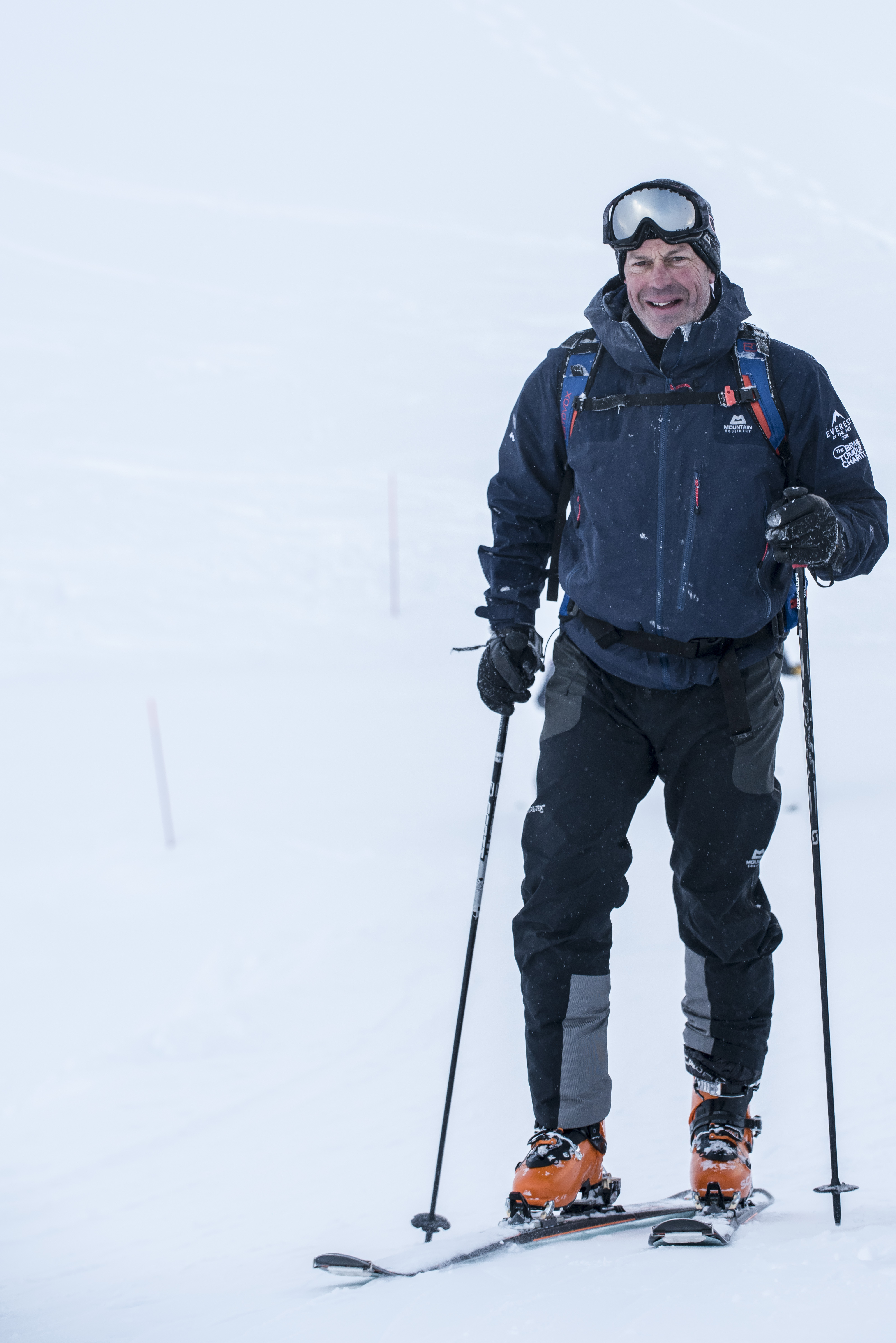 "Kirstie thinks I’m absolutely mad! She thought I was mad last time. And actually she was quite worried. It was very sweet because she was worried about safety, and my heart. And would I actually come back?” Phil Spencer